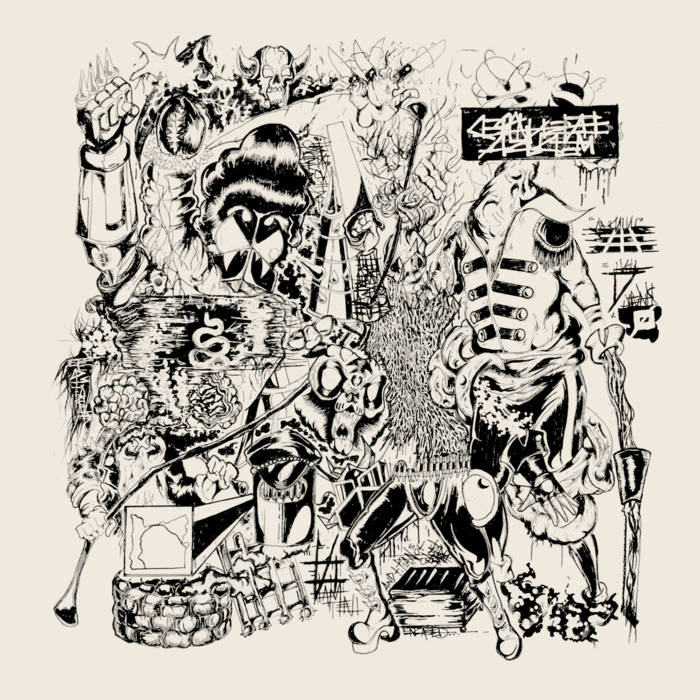 I Have Four Names

Leeds-based noise-rock band Thank will soon drop their second EP Please. Coming out as a joint venture between Buzzhowl Records and Belgium’s EXAG, Please is the follow-up to the group’s debut EP, 2017’s Sexghost Hellscape.

A major change in Thankland since Sexghost Hellscape is the group’s full integration of Theo Gowans, well-known in his own right on the UK’s harsh noise scene for his hyper-prolific output under the pseudonym Territorial Gobbing. Gowans is a fellow member of Leeds’ autonomous space CHUNK, the co-operative rehearsal/event spot that has also incubated projects like Cattle and Slut Drop. Though he joined the band in the run-up to Sexghost Hellscape and did play on that record, Please is the first Thank release which has involved Gowans throughout the writing process. Here he forms part of Thank’s midfield, busying himself on electronics while Lewis Millward and Cameron Moitt oscillate between guitar, bass and synths.

Compared to Sexghost Hellscape, Please is at once more defined and more ragged - a result of these tracks being refined more extensively in the studio. Though recorded with live drums from Jack Gordon, the precision-engineering of the grooves here is reminiscent of sequenced dance music. Lead single ‘Think Less’ is anchored by a bassline as rubbery as anything you’ll hear coming out of DFA Records, and disco beats propel ‘Commemorative Coin’ and ‘No Respect For The Arts’.

Now bolstered with an extra pair of hands, Thank have paid increased attention to textural work. The angular guitars heard on Sexghost Hellscape have mutated into a monstrous scree that sounds like a swarm of angry hornets. It is a maelstrom not dissimilar to recent work by Daughters and The Body. The juxtaposition of frenzied noisescapes with tight rhythms makes for a discombobulating listen - you find yourself unsure whether to dance to these tracks or run away from them.

While the tension in Please could be too much for some bands to hold, Thank sustain it expertly across the four tracks here. This is thanks in part to superbly-balanced production by Rob Slater and Jamie Lockhart (Greenmount Studios) as well as a meaty mastering job from Declared Sound’s Dominic Clare. Furthermore, vocalist Freddy Vinehill-Cliffe (Beige Palace) acts as a lightning rod for both elements of Thank’s sound. Vinehill-Cliffe’s lyrics tackle by turns Catholic guilt, deaths in the family, his experiences in therapy, sex, loyalty and betrayal. Whatever the subject matter, every syllable of Please is delivered in a self-flagellating yelp that is equal-parts Xiu Xiu and post-Nite Flights Scott Walker. Such a tragi-comic performance is the perfect focal point for Thank’s harsh, powerful Please.

Via Buzzhowl (UK) and EXAG (EU)

Bringing it up and taking it down since 2018

Bandcamp Daily  your guide to the world of Bandcamp

outré black metal, with a Victory Over the Sun interview and music from Liturgy and Jute Gyte.